We have recently returned from the most amazing trip to the Philippine’s, I was so sad for the entire 17 hour journey back to Dubai – and not just because Cebu Pacific didn’t have TVs on the flight!

We had a slightly hectic start to the trip, the first leg of the flight from Dubai to Manilla was around 9 hours, and we were due to arrive in Manilla with approximately 2 hours transfer time before our connecting flight. However, we were delayed by around an hour and a half leaving Dubai and by the time we landed in Manilla we had about 25 minutes to make our next flight.. in another terminal! Thankfully we only took hand-luggage with us and the queue at immigration moved pretty quickly.

We had read online beforehand that there is a free shuttle bus that you can take from the international terminal (Terminal 3) to the Domestic Terminal (Terminal 4) that comes every 30 minutes and can sometimes be delayed. So we grabbed a taxi instead – the yellow taxis are airport taxis and when you queue you will receive a token which outlines your taxi driver, taxi number plate and journey charges. To cut a long story short, we made it to the (closed) check in desk but because the flight had not started boarding they allowed us to check in and get on the flight – thank God because this was the last flight of the day and I really didn’t want to deal with the hassle of spending a night in Manilla and arranging a flight to Coron for the next morning!

So, the second leg of the journey was a short flight from Manilla to Coron which took around 45 minutes. The views as we flew into Coron were stunning, the scenery was so untouched it looked like we were flying directly into Jurassic Park! We had our hotel arrange a transfer which consisted of a 30 minute drive to one of the ports and then a 30 minute boat ride to our hotel; as you can imagine, by this point we were exhausted and couldn’t wait for a drink! 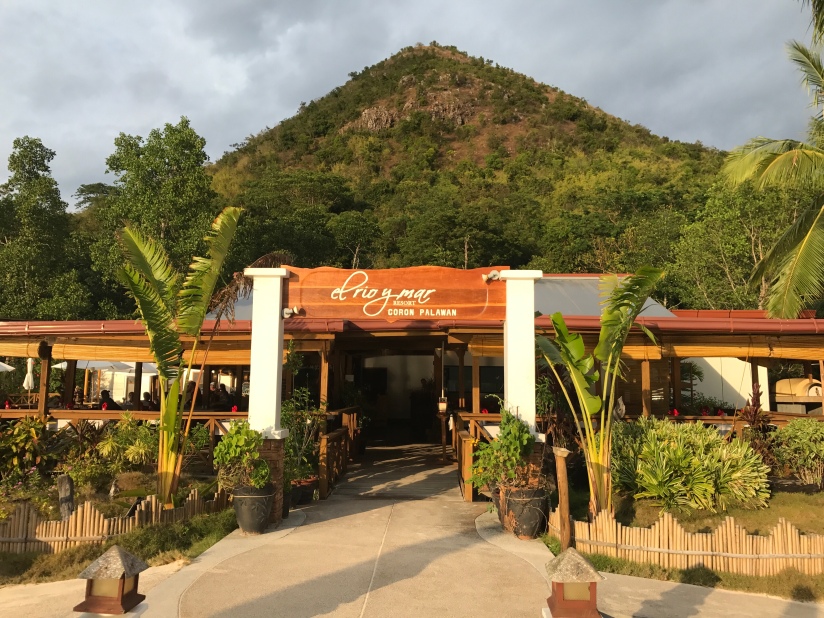 We, eventually, started our holiday by spending four nights at El Rio Y Mar which is a hotel on a small island off the coast of Coron. The hotel resort was the only thing on the island which was absolute bliss! From the very first moment we arrived on the island we were greeted with a warm welcome and a song from the staff and we knew that we had arrived in paradise! The staff were extremely friendly and couldn’t do enough for us during our stay. We had booked one of the cottages along the seafront, the room had a lovely rustic feel to it.

We spent the next day doing the Coron Islands Day Tour which was an excellent day exploring the beautiful islands and lakes of Coron. We visited Kayangan Lake, Barracuda Lake, Siete Picados Marine Park, Maquinit Hot Springs and Coron town – I will blog separately about the island hopping tours in Coron!

There was a short hiking trail around the back of the hotel which we walked one morning. There’s an easy route and a difficult route – or as the staff described “hard and harder”! We took the easy route and it only took 20 minutes at a very leisurely pace, whilst wearing flip flops.. The views from the top were beautiful and we could see the whole resort and more. On the walk back down we even saw a wild monkey which made my day!

We felt so relaxed at this resort, literally as if we were on Couple’s Retreat! They had plenty of equipment for activities that you could take out free of charge including paddle boards, kayaks and snorkelling gear. It was my first time paddle-boarding and I was motivated to stay on the board because we were advised that there had been sightings of box jellyfish close to the shore! I loved paddle-boarding and, unlike Ryan, I found I was quite a natural! 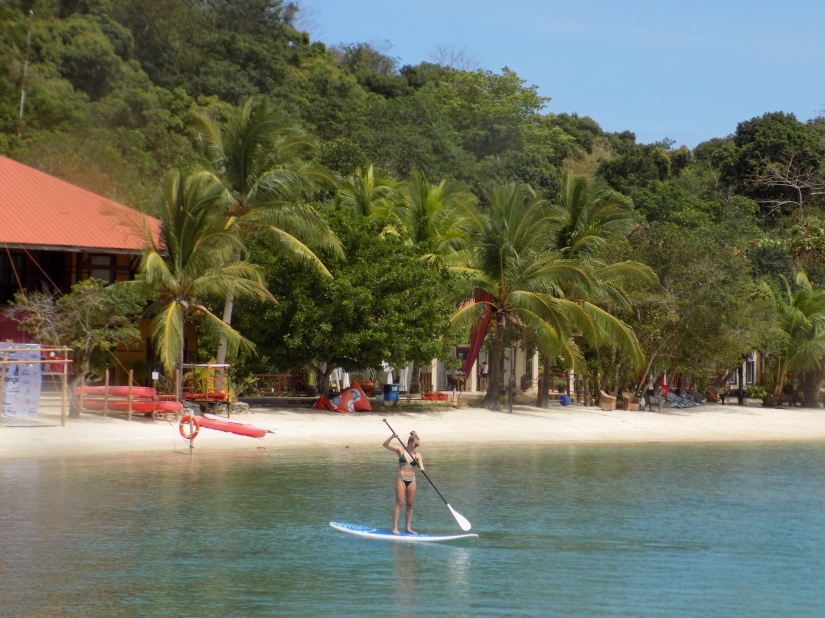 The staff could not do enough for us and the night before my birthday they gave me a birthday cake and sang happy birthday around our dinner table which was lovely. I felt so relaxed during my whole time at El Rio Y Mar I didn’t think the next stage of the holiday could top it…

We travelled between Coron and El Nido on my birthday and although 4 hours of it was spent on a ferry, it was an adventure and something very different to my previous birthdays! We booked the ferry in advance online with Montenegro Shipping Ferrys which leaves from the pier just outside of Coron Town. The ferry cost around for £35 (1800pp) and I’m sure we could have haggled this down but we booked in advance online to ensure a seat as we were on quite a strict timetable.

When we arrived in El Nido we took one of the tricycles to the resort. The tricycle should be 50pp, we were quoted 100pp by the driver and instantly bartered the price down and he didn’t argue with this, so be sure to haggle!

Thankfully we only had hand luggage with us as I don’t think we would have been able to fit in one tricycle with a suitcase each! The resort was about 10 minutes tricycle drive from the harbour and we stayed in a lovely cottage near the beach front. We had to give our breakfast order to reception the night before along with a time and this was brought to our terrace each morning as our wakeup call.

The resort did not have a restaurant but this was no problem at all because as you leave the resort onto the beach there are several restaurants either side (I will blog separately about all of the amazing restaurants we ate at during our stay in El Nido!).

We booked an island hopping day trip with Bay Breeze Travel and Tours, one of the local tour vendors along the beach front. We paid 6,500pp for a private day trip of the highlights from tours A and C which included: Seven Commandos Beach; Helicopter Island; Matinloc Shrine; Secret Lagoon beach; Big Lagoon and Small Lagoon.

As we were leaving Helicopter Island (named due to it’s resemblance to a helicopter?) we were lucky enough to see a turtle swimming in the sea! We didn’t have enough time to get our snorkel on and jump in as the anchor was already up but we were so excited as it’s the first time either of us have seen a turtle in the wild! Secret Lagoon Beach was one of the more unique islands we visited. The boat moored up at what looked like a mountain wall, we then had to swim through a small hole, you could keep your head above water to swim through, but when you got through to the other side the water was shallow and it had a hidden beach inside!

We also loved the small lagoon, which was our final stop of the day. You have to rent kayaks as the boats can’t fit through the lagoon. The water was so clear it was beautiful we could see starfish on the bottom of the sea floor! I would definitely recommend booking a private tour because it gives you more flexibility to spend as long as you want at each of the destinations.

When leaving, we took a flight from El Nido Airport. It took 30 minutes on a tricycle from Mahogany Beach and cost 350pp. I was so depressed for the whole 16 hours journey back to Dubai, I really did not want to leave! The Philippine’s has such a raw beauty, it feels completely untouched and I hope that it can stay this way. All of the restaurants / bars we came across used recyclable straws made of bamboo, none of them had plastic straws. Similarly with carrier bags, almost all of the vendors used paper bags which was refreshing to see. I would love to return and visit some of the other islands and also explore a bit more of El Nido. 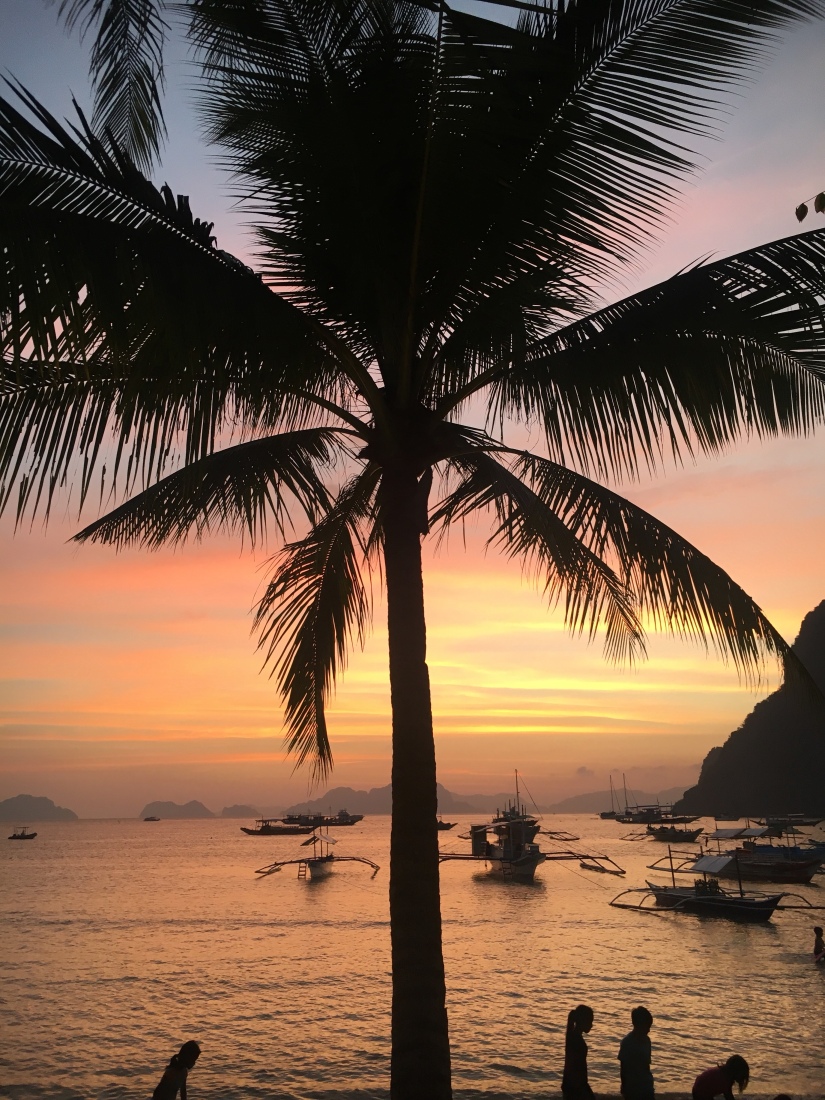 1 thought on “The Dream that was the Philippine’s”