As we landed in Malaysia I was so excited to start exploring my 34th country and to finally be back in South East Asia. We were really impressed by KLIA airport – it was huge!

The flight to KL from Dubai is around 7 hours plus the 4 hour time difference, so we left Dubai at 9pm and arrived in KL at 8am the next morning.

We read online (this site was super helpful) that it is relatively easy to get a taxi so we headed down to the lower ground where there’s an Airport Taxi kiosk. You have to pay 2RM (approx. 40p) for a ticket and you choose whether you want a budget taxi, Premier Limo, Super Luxury or Family Service taxis. We opted for budget as it was the cheapest option but nevertheless, it was comfortable and had AC (and to be honest we slept most of the drive to central KL anyway). The drive from the airport is around 50 minutes however there was so much traffic – we must have hit the morning rush hour or something – so it ended up taking close to 2 hours! Our hotel had quoted 150RM for a transfer from the airport but we paid our budget taxi 55RM including tolls and a tip.

Kuala Lumpur had a variety of hotels ranging from luxury 5* to budget hostels and motels. We decided to stay at Traders Hotel (part of the Shangri La brand) and we were sold on the view from the hotel room of the Petronas Towers. Right from checking in the staff were extremely helpful and even though we arrived at 11am our room was prepared and ready for us. The concierge were also so helpful with recommendations of things to do and getting around the city.

Traders Hotel run a free shuttle bus every 15 minutes to Suria KLCC mall (but it is only a short walk). It is also situated in front of KLCC park which was lovely to walk through and sit on the grass for some down time. The only downside of the hotel was that the swimming pool was indoors whereas other hotels nearby, such as the Mandarin Oriental, W Hotel and Four Seasons, all had amazing outdoor pools. But we didn’t intend on spending a huge amount of time at the hotel during this trip so we didn’t mind too much.

We got to our hotel checked in, dropped our bags, got changed and we’re out of the door within 30 minutes ready to explore with my strict itinerary for the day!

We jumped in a taxi and went straight to the Chinese Thean Hou Temple. Our taxi driver explained that it’s quite difficult to flag taxis down in that area and so left the meter running and waited for us to look around. The temple was beautiful with hundreds of red lanterns, ornate statues and flowers all around. 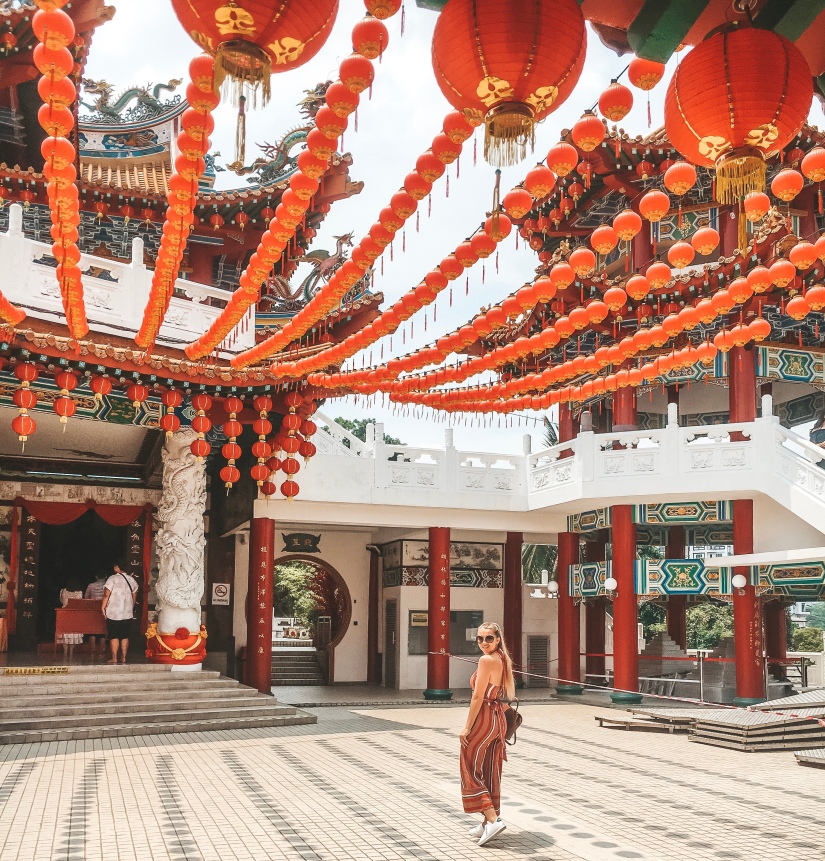 A driver then took us to Sri Mariamman temple which is the oldest Hindu Temple located in China Town. We decided to leave the taxi and continue exploring by foot. We had been with our taxi driver for approximately an hour and a half and the meter only totaled 65RM.

Petaling Street Market in China Town was a crazy array of shopping and street food and it was bustling with tourists and locals combined. We spent an hour or so just walking around and seeing what all of the stalls had to offer before heading back to the hotel to chill whilst admiring the amazing view of the Petronas Towers again from our room!

We flagged down a budget taxi that drove us around 20 minutes to the Batu Caves which are located slightly out of the city centre. It’s free to enter the Batu Caves and you do not require any tickets or tour guides. You do need to dress respectfully but you can rent scarves / long skirts from the base of the steps.

We climbed the 272 stairs up, relatively quickly I must say, and explored the inside of the caves and the shrines. We saw the infamous monkeys hiding out inside the temple scouring for any goodies they could steal from the people inside! One monkey got hold of a mans bag which, to the monkeys delight, contained a coconut and we watched, amazed, as the monkey started smashing the coconut on a rock to open it!

We then descended down the 272 stairs and found out little taxi driver waiting to take us back to the city! 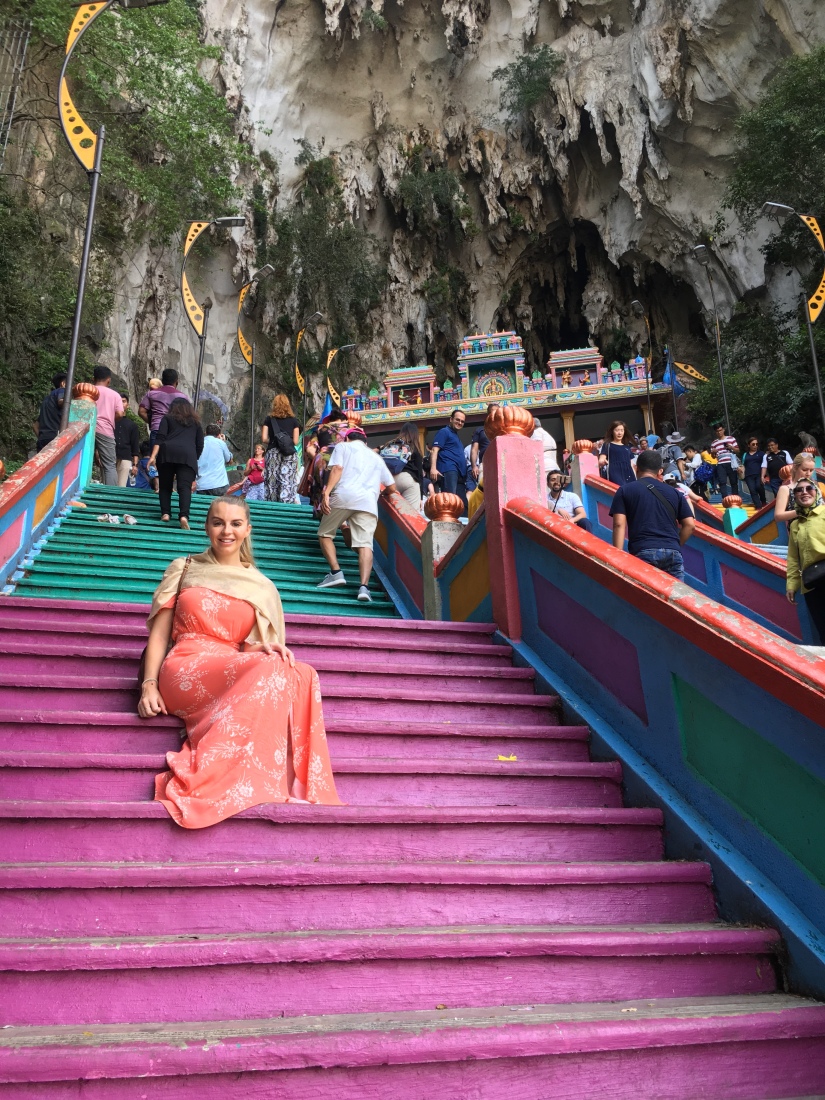 This was another nice (free) activity to do in the city. The canopy walk runs through a protected garden area in the centre of the city and you walk up several steps (not a great choice post Batu Caves, but we still had fun) and the canopies guide you through the tops of the trees, heading towards the Manara KL tower. 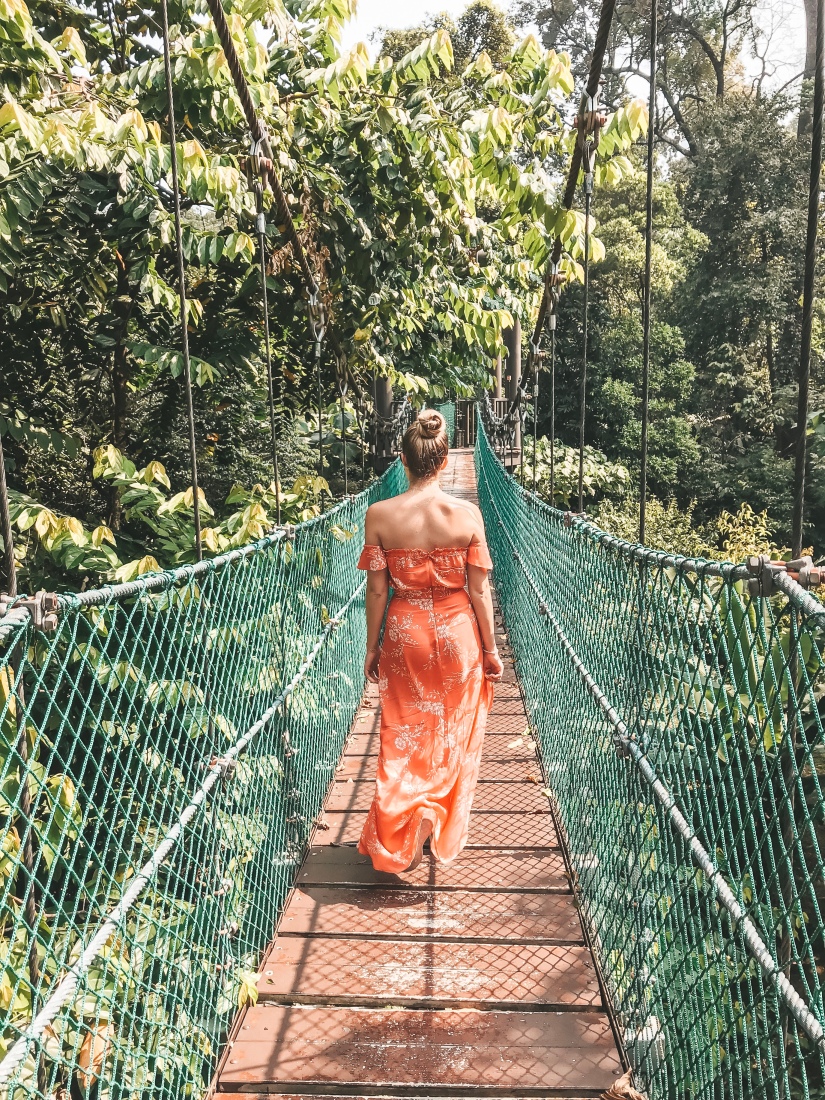 We decided not to enter the Manara Tower as there was a huge queue and entry charge up to the viewing platform. So instead we walked (a long walk) back to our hotel, stopping off in the KLCC gardens first.

The gardens are located out the back of the Petronas Towers (between the back of the towers and the back of our hotel, conveniently). We stopped in one of the supermarkets located on the ground floor of the KLCC Suria Mall to get some drinks and snacks and sat out in the park, taking in the view and lovely weather.

We really enjoyed exploring KL but found that a few days was enough to cover off our itinerary. If you would like to read more about dining in KL, check out my other blog here.

British expat, living in Dubai with my husband, newborn son and cats! View all posts by vacaysandsunnydays