Dec 3, 2019 vacaysandsunnydays
I honestly don’t even know where to start with all the food we ate on our trip. We didn’t have one bad meal during our entire stay in South Africa and with such an abundance of choice, it was difficult to choose where to eat! We had received so many helpful recommendations from friends on the best places to eat before visiting and it was advised to make reservations so we weren’t disappointed!

When we arrived in Camps Bay our hotel room wasn’t quite ready so we headed out for a bite to eat. Conscious that we had our Afternoon Tea already booked for later in the day we chose La Belle Bistro & Bakery and shared a pot of mussels, calamari and a few glasses of the Chenin Blanc. I don’t know if it’s because we were quite hungry or what, but the mussels in white wine sauce were some of the best I have ever had. 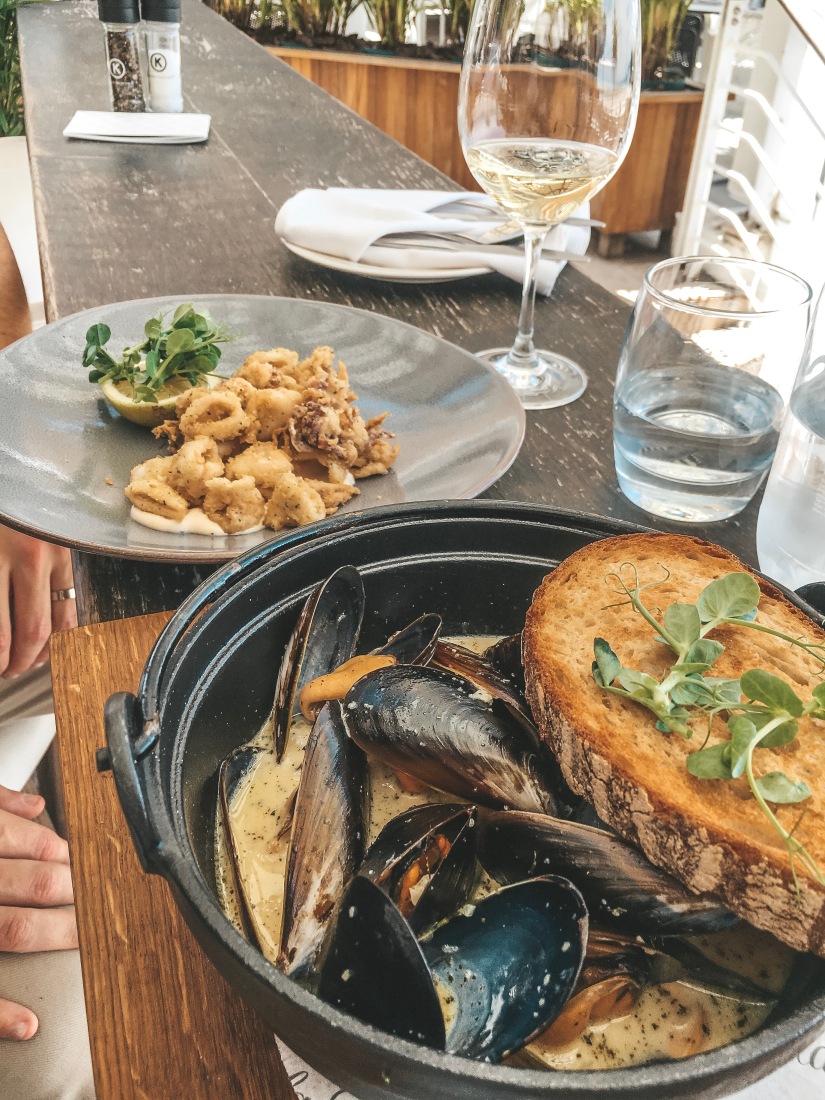 We were super excited to try the seafood at The Bungalow and it didn’t disappoint. Our reservation was at 8pm but I would advise arriving earlier to watch the sunset. The restaurant is located just off the beach with a really relaxed vibe. You can choose to sit in the marquee seating area closer to the beach or a bit further back into the restaurant. We ordered a portion of the langoustines which came with 6-8 in a serving and one portion of the prawns which came with 10 in one serving! We ordered a side of chips and veggies and a bottle of white wine. It felt like a lot of food but, of course, we finished it all! The staff were friendly and very informative and it was, all in all, a lovely evening.

We sat in Bilboa for some sunset drinks one evening but as we started to see the food being brought out to tables around us we got slightly envious! So we ordered some starters just to tide us over until our actual dinner reservation later on that night. I ordered the halloumi which was amazing. It was served with a light marmalade sauce, freekeh and chilli. Absolutely gorgeous. Ryan ordered the lightly battered prawns which, considering it was a starter, was a generous portion of 5 large prawns. I wish we had time to return for a main meal! Upstairs, they have a rooftop bar, Chinchilla, which was much more lively with a DJ whereas the restaurant itself is a more chilled vibe. 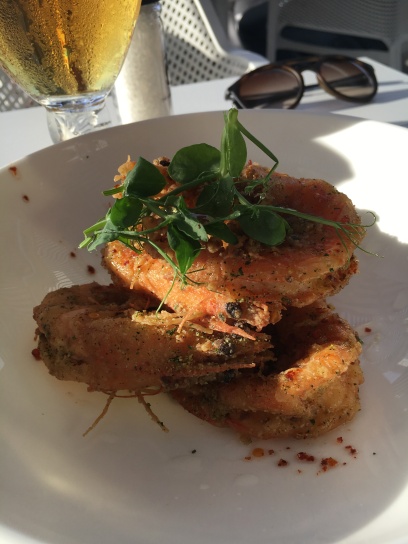 My favourite seafood meal in SA (and situated less than a three minute walk from
our hotel)! The Codfather had a much more rustic vibe to the restaurant than others we dined in. We visited for lunch and were dressed in our gym clothes and trainers as it was our reward after completing the hike up Table Mountain! They have a sushi counter with all of the fresh sushi on the conveyer belt which you can help yourself to at any time and take back to your table. They also have a fresh fish counter and your waiter explains all of the different types of fish that they have on offer and their flavours, what you should accompany it with and helps you decide on the portion sizes. As we had just worked up a huge appetite, we ordered 3 langoustines each, 3 prawns each, Kingklip fillet (which is the local line caught fish and is very similar taste and texture to cod) and also some butter fish, which was absolutely gorgeous and I would highly recommend. The food is served in a copper basket with rice, chips, vegetables and a side of four sauces, the garlic butter was my fave! We demolished the food and saved a little bit of room for some sushi which was super fresh and tasty!

Paranga is located just along the seafront in Camps Bay with a mixture of big groups and couples dining when we joined for dinner which created a great atmosphere. We both opted for steak for dinner this time and were not disappointed. Ryan ordered the rib eye whereas I ordered the fillet, both cooked medium and with chips, mash and peppercorn sauce on the side. My steak was slightly undercooked for my liking but the staff quickly rectified that and when it returned it was cooked perfectly.
I saved room for desert this time and we ordered the rocky road which came with brownie, crushed chocolate biscuit, marshmallows, piped walnut icing and espresso flavoured ice cream. I’m not going to lie, this was my favourite part of the meal! 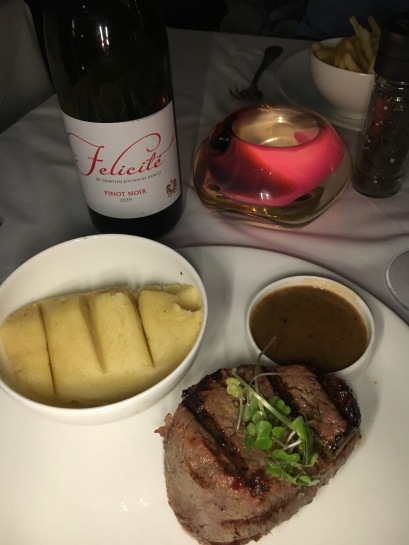 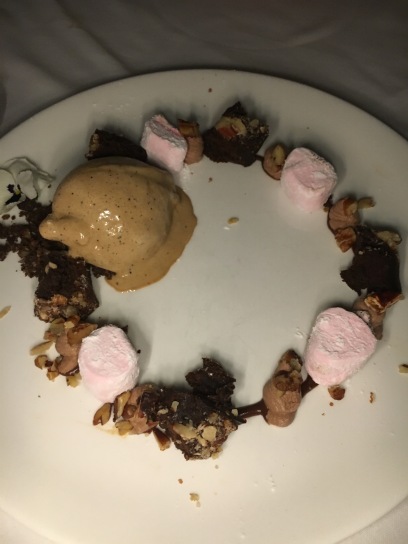 If you’re in the area and are not quite sure what to have for lunch, head straight to the food market at the V&A Waterfront. I lost count of the number of different stalls inside offering everything from pokè bowls; samosas; wraps; burgers; oysters and fresh seafood; biltong; desserts, you name it and you’ll find it in there. We ordered a selection from different stalls including samosas, grilled pork belly wrap, lamb with aubergine wrap and Ryan got a beer (of course). We sat outside on the picnic benches and there were also local street performers around the area so we sat watching a group of young children in tribal wear singing and dancing and it was just amazing. 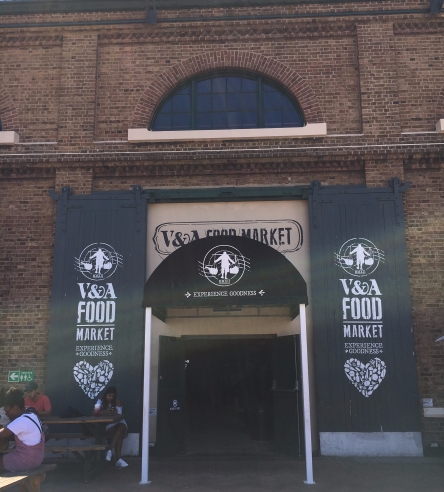 We were so lucky with the weather when we visited the V&A Waterfront so we headed to one of the bars overlooking the port and had a few glasses of wine and some sushi. It’s in the perfect location for people watching so we each had a few glasses of the Chenin Blanc (as you can tell this it been a favourite of ours this holiday!) and the teriyaki salmon sushi which was lovely!

We also wanted to visit the Grand Africa Restaurant and Beach Club during our stay in Cape Town but sadly, due to having to reschedule our hike up Table Mountain, we didn’t have time on this trip.

Afternoon tea at the Mount Nelson Hotel has been voted in the top 10 in the world, and we understand why. Upon arrive the service is exceptional. The hotel has a high end but relaxing feeling to it. The weather was beautiful so we sat outside on the terrace and ordered a few glasses of MCC to go with our sandwiches! They start by first providing you with a stand of hot and cold savouries including salmon, egg, ham and cheese sandwiches, spinach and cheese frittatas, onion bhajis and others. You can request any of these as many times as you like! Then come the scones with jam and clotted cream. Obviously we had the standard disagreement on whether the cream or jam goes on first (I say jam, Ryan says cream)! The sweets are kept inside the lounge area and there’s a huge variety but by this point I was exceptionally full! They also have a menu with over 40 varieties of tea, all of which are included in the price. Overall, it was a lovely, relaxing afternoon and an entitled different vibe to the hustle and bustle of Cape Town outside of the hotel walls.

We stopped at Two Oceans for lunch during our day trip down to Cape Point, before heading to Boulders Beach. We had read about how busy the restaurant gets so booked in advance which I would definitely recommend to avoid disappointment! We had a great seat outside overlooking the sea and ordered one of the seafood platters to share which came with a selection of prawns, mussels, kingklip, calamari and chips. It was the perfect amount of food for two which we shared with a bottle of white wine and couldn’t resist the carrot cake for dessert! 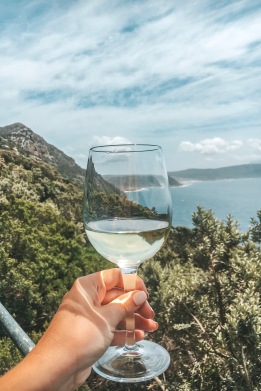 The last, but by no means least, and actually our favourite restaurant that we visited, the Pot Luck Club. Reservations open on the first day of the month before you wish to visit, so we made sure to set a reminder to make our reservation on the 1 of October to avoid disappointment! When we arrived we were welcomed with a complimentary glass of champagne each as we had informed the staff that we were celebrating Ryan’s birthday which was a lovely touch. We were sat just opposite the cooking station so had the entertainment of watching the chef at work all evening which was so impressive. The menu is based on a tapas / sharing concept and they advise that you order 6-8 dishes to share. The plates are brought out in the order recommended by the chef, starting with the lighter dishes first.
We started with the fresh ceviche tacos, served with a jalapeño sauce, followed shortly after by the calamari which was lightly fried and served with a mustard aioli and Parma ham. Next came Doenjang Glazed Tuna which was four generous chunks of tuna, lightly seared with a teriyaki style sauce. Up next was the Springbok Carpaccio, I almost didn’t want to order this dish but I’m so glad we did as the meat was so tender and with balsamic dressing and thin crouton crisps on top, it was delicious. 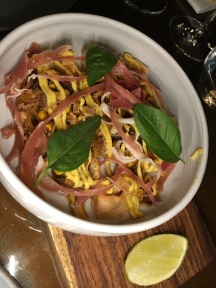 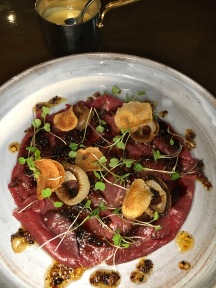 These were essentially our starter dishes and we then moved on to the heavier plates, starting with the Peri Peri Chicken which was cooked perfectly and served with a feta crumble on the top – slightly better than Nandos I must say! Our penultimate dish was Penang Pork Belly which was served in a light coconut curry sauce with broccoli and broken fish crackers. We definitely got the taste of Malaysia through this dish. Finally, we finished with the Smoked Beef Fillet served in black pepper, truffle and cafe au lait sauce. Oh my god it was amazing. 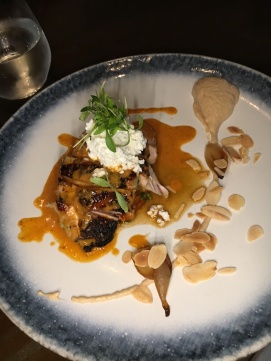 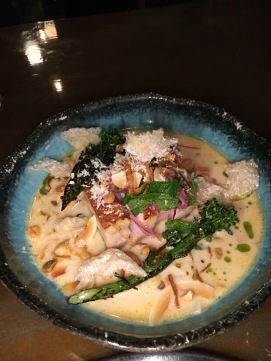 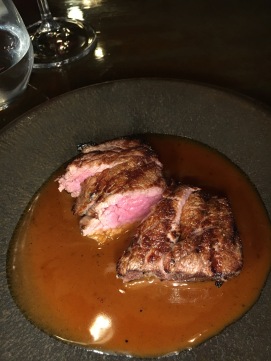 Overall, everything about this restaurant was incredible, from the service, to the ambience in the restaurant and of course, the food.
Loading Comments...
Comment
×