I really don’t know where to start with writing this. I also cannot believe how quickly the time has gone. We’ve already been married almost three weeks. In the build up to the wedding everyone told us how fast the day would go but you don’t realise it until you’re actually there, in the day. I had to stop and have a few moments to try and take it all in.

Ryan and I arrived in France on the Wednesday with a luggage allowance of 75KG! We picked up our hire car and headed straight to the venue. The weather was a bit hit and miss on the drive to the venue but I didn’t want to let it put a downer on things so we headed straight out to Ikea and Carrefour to get some of the final things we needed for the weekend. As our wedding was dry hire it meant that we had to source everything through vendors. However, there were somethings that were definitely cheaper to source ourselves, for example the caterers wanted to charge €2 per shot glass whereas you can get a pack of 6 for €1.60 in Ikea. The same with water and soft drinks. So after approximately 5 hours in the shops with a stop at McDonalds in between we were tired and headed back to the Chateau. On the drive back the heavens opened and I was sat in the back of the car surrounded by Coke and glasses and just cried. I thought, I can’t believe everything we have planned over the course of the last year is now going to be ruined by the weather.

We got back to the Chateau and unpacked everything into the caterers kitchen connected to the marquee and sat in the lounge with a bottle of wine and wrapped up our gifts for our family. 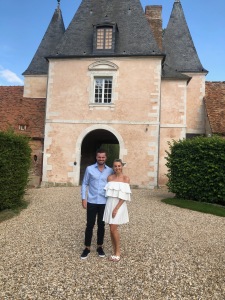 The next morning we went out to the shops again and stopped at a local bakery to order some sandwiches ready for when the family arrived. We asked the lady if she could speak English and her expression was shocked so she ran to get her son to help! We ordered 20 huge baguette sandwiches and some eclairs and little pastry bits for the family lunch and headed back waiting for them to arrive. Literally as the coach turned into the Chateau the sun burst through! It was so exciting to have all of our family there to show them what we’ve been talking about for the past year. We showed everyone to their rooms and all gathered in the marquee for lunch. It was exactly what we wanted, having all of our family there just relaxing and enjoying time together.

That evening was the first event of the wedding weekend and we had hired the caterers to prepare a 3 course meal. It was so lovely having all of our family together and the food was amazing. As people were on the first night of their hols and it was the first night we could properly relax and enjoy ourselves a few of us got a bit rowdy and didn’t make it to bed until almost 2. 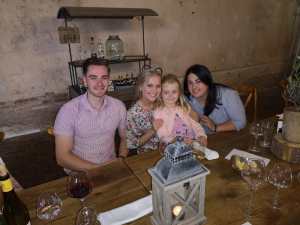 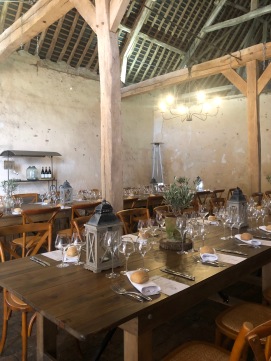 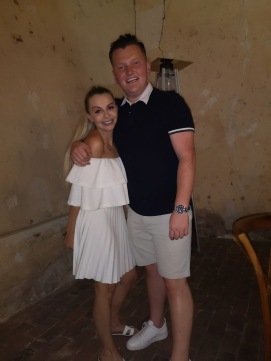 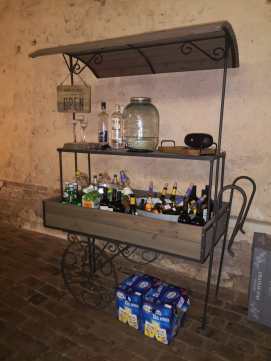 The morning of the BBQ, Ryan wanted to laze about in bed and nurse his hangover but I was up and out of bed at 8am to tidy the barn as we had a list of tasks we needed to do that day! Me, Ryan, Mum and Ryan’s Uncle headed back out to the shops to pick up the remaining soft drinks and some bits for lunch for the family. The soft drinks were one of the things we were really struggling with, how do you quantify how many cans of coke are going to be needed for 80 people for a two day event?!

When we got back to the Chateau the weather was beautiful and everyone was sat outside in the sun so we had a little picnic, opened some wine. It was just perfect. It was exactly how we had pictured having all of the family together and one of the reasons that we decided on a destination wedding in the first place. 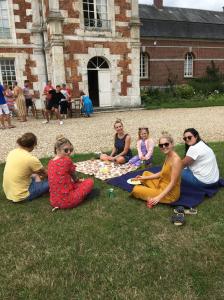 That afternoon, we had a rehearsal with all the people who would be walking down the aisle. Ryan and his best man, our mums, the flower girls and page boys, the bridesmaids and me and dad. That was the first time I got emotional and had to fight back tears a little bit. Ryan’s little cousins Rufus and Rafferty were so funny and I was kind of hoping they would be a little bit naughty walking down the aisle on the wedding day, but they were absolutely perfect on the day.

After the rehearsal, Sheree (bridesmaid/hairdresser) took me upstairs and treated me to a hair wash and blow-dry so I could get ready for the BBQ. Luckily the weather held off for the BBQ and we still had lovely sunshine. For the BBQ we had a selection of garden games and our wedding planner had set up some picnic blankets under the trees for people to sit and chill out. We had giant connect four,  corn hole, Bowles, beer pong and rounders. The rounders was a hit and at one point almost everyone was there playing rounders together, I even managed to run in my dress and heels! It was so surreal seeing so many of our amazing friends and family from all different walks of life playing games together, drinking and just having the best time. 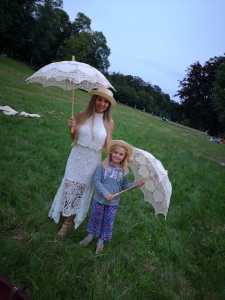 We had the same caterers for the family night, the BBQ and the wedding day and the food was amazing. We had chosen a selection of meats such as lamb chops, pork, sausages, chicken, salmon skewers and it was all so tasty. At around 10pm it started raining, to be honest I’m just glad the rain held off that long! Our wedding planner, Sarah, was on hand straight away handing out umbrellas and pashminas to keep us dry. At around 10.30 the fireworks started. They were brilliant. I was stood next to Ryan and Dad watching the fireworks under an umbrella just trying to take it all in.

When the fireworks finished, me and Katie snuck off and went up to get ready for bed as Ryan was spending the night with his Best Man, Harry. I can honestly say that that night was the worst night’s sleep of my entire life! Me and Katie were convinced that we had food poisoning which resulted in me calling my Mum at 2.30am in tears as I had convinced myself that there wouldn’t be a wedding because all of the guests were ill with food poisoning! That obviously wasn’t the case and it must have just been a combination of nervousness and excitement. Katie also wanted to keep the light on the whole night as she was worried about seeing a ghost in the Chateau (which I did actually see the previous two nights). I managed about an hour and a half’s sleep and once we noticed it started to get light outside, Katie turned the light off. Then within about 15 minutes our alarms went off to start getting ready! 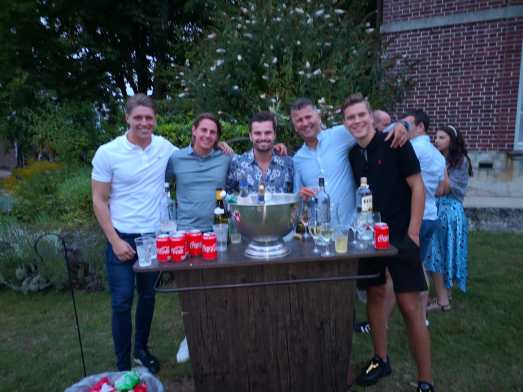 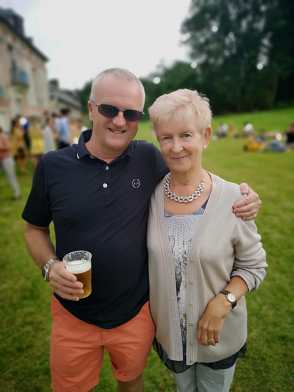 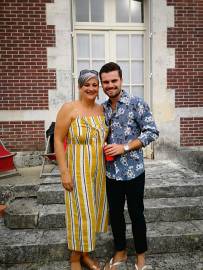 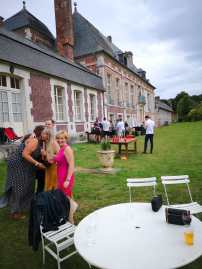 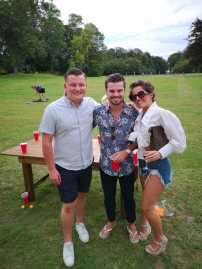 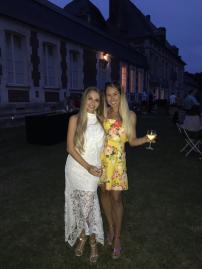 2 thoughts on “The Lead up to Our Wedding”